Cosmetic surgery of the labia minora is focused on reshaping these delicate structures carefully and precisely. Reshaping of the labia minora is commonly referred to as reduction labiaplasty, labia minoraplasty or simply labiaplasty. These terms are not sufficiently descriptive to establish an accurate cosmetic assessment of finer details of the contours that are involved in defining the features and endpoints of a well-planned aesthetic procedure.
Dr. Tajkarimi performs labiaplasty under local anesthesia in our state of the art Loudoun location.  you can read a magazine or play with your phone while the procedure is performed.  What makes us different?  We perform the procedure while taking into consideration all surrounding structures, including clitoral hood and labia majora, to maximize cosmetic result.  Most plastic surgeons only perform a linear removal of extra skin without addressing the extra tissue surrounding the clitoris, which often results in unsightly clitoral prominence.  Dr. Tajkarimi can address all anatomical considerations with ease.

Labia minoraplasty is divided into three categories based on the primary reason for which reshaping is requested.

Some procedures are limited to one side only. Others may involve surrounding anatomical structures of the vulva such as the clitoral hood, the fourchette (the zone where the labia meet posteriorly), the labia majora or the perineum (the deeper muscular tissues between the vagina and the anus.

The outer labia are known as the labia majora and they form the outer border of the vulva. Aesthetic options for the labia majora may target the skin, laxity of the tissues or loss of volume. 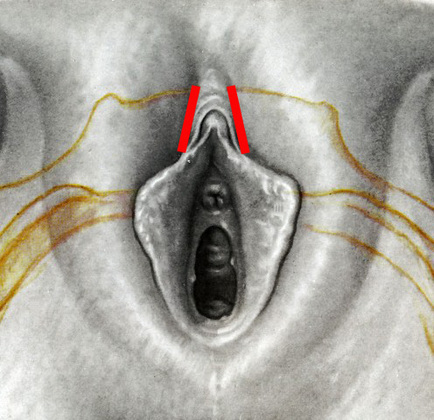 The clitoral hood, also known as the prepuce is layer of loose skin which envelops and protects the clitoral shaft and the head, or glans, of the clitoris from constant and unwanted friction.

Sometimes redundant folds of loose skin unrelated to the body of the clitoris (shaft and glans) develop alongside the lateral borders of the clitoris. This lax tissue may occur on either or both sides of the midline, may fuse with the labia minora and may exceed the clitoral hood in size.

Clitoral hood reduction procedures focus on these lateral folds of loose tissue. The glans clitoridis,  the head of the clitoris, is not exposed by this type of surgery. Meticulous superficial dissection and precise incisions which avoid the course of the clitoral nerve supply protect the sensitive nerves which supply this region.

ANATOMY OF THE CLITORIS

Your journey to a better you begins now. Dr. Tajkarimi is ready to begin the conversations that will help treat your conditions and complaints, transform your life, build your confidence, and bring you the happiness that comes from looking and feeling better about yourself. Fill out our secure request form below to schedule a consultation with Dr. Tajkarimi.